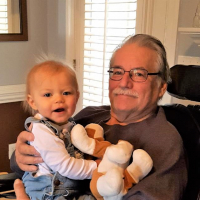 April 2019 in Brain Injury & Stroke
I have been diagnosed with Anterior Spinal Cord Syndrome and I expect my condition and source of paralysis is probably rare among those who participate here.  My injury, if you want to call it that, was actually the growth of a cyst around C5 - T1 area.  The cyst grew until it started blocking blood flow to my nerves below C5.

The day that I first had symptoms, I was in Scranton Pennsylvania for the Minor League Baseball AAA National Championship which was won by our Durham Bulls.  The party the night before was quite the celebration, but I went to bed expecting nothing worse than a mild hangover that would easily be cured by a hardy breakfast and lots of coffee. During the night , about 4:00 AM, I awoke with a terrible pain in my lower back.  I thought that I could get some relief if I could find some Advil or other pain reliever, but I had none with me, and I wasn't getting any sympathy in the hotel lobby.  I'm pretty sure they thought I was a drunken reveler and not just some poor devil experiencing the onset of a constricted spinal column.

I finally found a vending machine with Advil, dragged my left leg along with my right which was still functional, and held myself up by hanging on to anything that was handy on the way back to my room. No relief at all from the medication, so I packed my bags and headed for home.  In retrospect, this was not a smart move.  I was traveling by motorcycle and I had 500 miles to go to get me back to NC. By the time I arrived home, the paralysis in my left leg made it difficult to shift gears, or hold the bike up at a stop.

The next morning I went to the emergency room at our local hospital and they arrived at Sciatica for a diagnosis and recommended that I see an Orthopedic surgeon, and sent me home.  Later that day I had chest pains along with the pain in my spine and my legs. I returned to the emergency room and they made sure I wasn't having a heart attack, prescribed some Valium, and sent me home.  A couple of days later we rented a wheelchair on our own as the paralysis was worsening.  I ended up back at the ER with abdominal pains to go with my chest pains to go with the pain in my spine and legs.  They sent me home again.

Later that night I ended up on the floor  with spasms almost unbearable and complete paralysis from my chest down. When the paramedics came to transport me, we asked to be taken to a different hospital since the local ER had already had 3 chances.  In the hospital the next city to our east, they gave me an MRI and had me on my way to the nearest University Hospital for surgery to remove the cyst from my spinal cord.  The surgeon told me and my wife that if I'd gotten to him sooner they might have been able to prevent most or all of the paralysis, but since I'd lost blood flow to my nerves for more than 48 hours, the damage was probably permanent.

So that's how I ended up here looking for peer support and people who understand what I'm going through.