Caregiving and Flawed Parenting-- to make you laugh!

First published on the Christopher and Dana Reeve Foundation Blog in November...

Our son lost a tooth recently and for a few days the Tooth Fairy was super busy, battling some wind and rainstorms, forgetting to stop at our house because of the Halloween candy wreaking cavity havoc from coast to coast. But then our son said, “Mom, do you think she has really forgotten me because I’m almost 10?” Not a huge enforcer of the tooth fairy, our kids still believe fiercely in her powers to take teeth from beneath human heads asleep on pillows all across the land, except, apparently, in the case of bad weather and Halloween.

That morning, I set an alarm reminder for post bedtime. Once the children were nestled in their beds, I looked in my wallet for a dollar. Seeing none, I thought briefly about whether the Tooth Fairy would leave quarters. She probably would not. I thought about leaving one of my own grandmother’s special two-dollar bills, but that would open another line of questioning. Geoff had just left for a work trip out west, so I could not even check with him. Exasperated by having lied already to them about the damn Tooth Fairy, I borrowed one dollar from my daughter’s wallet making a mental note to replace it the next day when I broke change for their school lunch bills.

The Tooth Fairy came. Hope was once again restored to the universe. Until. Until, that is to say, my daughter noticed her wallet had moved from its spot on my bookshelf to the kitchen in front of the coffee pot, with its velcro closure left undone. “Mom,” she startled me in the bathroom as I’m brushing my teeth, “Mom,” with more urgency this time, “I’m pretty sure the Tooth Fairy stole money from my wallet to put under Carver’s pillow last night.” It does not occur to her that her mother is the Tooth Fairy, but rather, the Tooth Fairy is, in fact, a straight up criminal.

I choke on my toothpaste spit. Seriously. She is eight years old. What the hell I want to scream. But I don’t. I look into her accusing, angry, betrayed blue eyes, and I tell her, “Honey, the Tooth Fairy didn’t steal your money, Daddy did. He needed a dollar for the tolls to get to the airport, remember? He didn’t want to take the time to take money from the ATM. So he just asked if he could borrow from you, and I said it was okay. I’m really sorry I forgot to tell you sooner.” She accepted my explanation, sort of, and gave her dad a serious tongue lashing later that night when the poor guy just called to say hi to his family.

See, this is what the dark days of November make us do. They make us lie about the Tooth Fairy to our small children. They make us take money from our eight-year-old and place blame on our husband. I know, I know, there are some of you out there judging how I could do such a terrible thing -- what am I modeling for my children -- what are they going to think one day when they realize there is no Tooth Fairy?

Well, when that day comes, I’m going to tell them that their parents, even without their superpowers, are a little bit like the Tooth Fairy, like Santa Claus, like their teachers -- none of us are perfect. So, I’ll tell them, your dad never could be the one to put the dollar under the pillow because he could never get to your bedrooms. Do you think he still forgot to remind me to do it as I lay half asleep on the couch surrounded by ninth graders’ essays? Of course he did. Did we ever use your money to buy drugs? No, never. To supply our non-existent vape habits? No never. To pay our electric bill? No, a thousand times no. 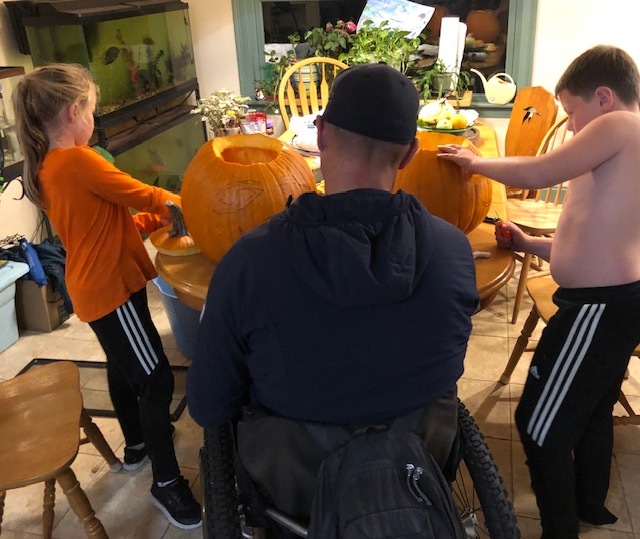 Your parents carved pumpkins with you and helped you to build snow forts. We also made you rake leaves in the fall and stack wood to help your parents with the tasks that require something called MANUAL LABOR. Those blisters which turned into callouses are going to make you stronger one day, just like your mom and dad. We are pretty awesome, even if we lied to you about the Tooth Fairy all those times when you were small. First the Tooth Fairy, followed by the Elf on the Shelf, followed closely by Santa and suddenly, the children are driving cars and dating and looking at colleges and it all happens so quickly. Blink. About as fast as fall turns into winter here in New Hampshire.