On Anniversaries of Injuries...My husband is reaching year 25

A friend sent me an article about a woman who had lost both her arms below the elbows and her legs below her knees. As interesting and powerful as the story was, as empowering as the woman clearly is in her day to day life, I wondered why this friend had sent me this piece through email. I live with disability every day. There really isn’t anything that shocks or surprises me anymore about what the human body may overcome or achieve, of how much more individuals make the choice to thrive over simply surviving a life changing disability. I’m still musing to myself about her reasons for sending when I see my husband’s name. Ahhhh, I realize. He has a quote in here, and that’s why she sent it. Lightbulb moment. Geoff hadn’t mentioned being interviewed for this human-interest story, so I was surprised and of course always proud to read his contribution to the conversation. 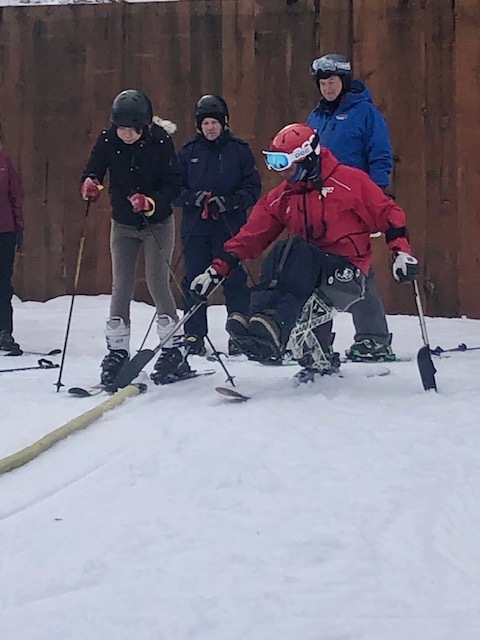 And then I started laughing. Like complete and total belly laughing. His comment really is something I’ve heard him say countless times to the people in our life together -- to the people he works with at other ski programs -- even to complete and utter strangers he meets at speaking gigs who chat him up. His response to some surprising statement someone makes about how he makes being a wheelchair user look easy goes like this, “Let’s face it, the truth of the matter is that you all are going to end up in wheelchairs or on crutches at some point; the difference is that I’m really good at it.” He always smiles when he says it, blue eyes sparkling and dimples dipping deeper into his always sun-tanned (maybe also windburned) cheeks.

So, I go back to reread and see what else he said before his joke. He explains how this person’s success is “typical of people who make the choice to overcome their disability...You don’t really have another choice. Some people don’t deal well with the choice. You just take that first step forward, that’s the difference.”

I met a man this weekend at our mountain while hiking up who had also happened to meet Geoff last year when he took a private ski lesson. He was an able-bodied man taking a private ski lesson with my mono-skiing, disabled husband. Geoff made him a better skier. He helped him to understand how the ski worked and how he could better work the ski. Geoff impressed this man, who may at first have been somewhat hesitant about what someone on one ski could teach him about being on two. Geoff feels like the most independent version of himself post spinal cord injury when he is skiing, when he makes sweeping arcs at top speeds, letting gravity be his friend and the beauty of mountain winters be his backdrop. He feels less independent in our kitchen when I’m yelling at him to get out of the way when I’m unloading the dishwasher or making school lunches, those less glamorous jobs of parenthood that still need attention. He may also feel less independent when our kids forget to take his chair out of the back of the car when they get home -- or maybe even less independent when they drop their backpacks right in front of the door or when I haven’t had a chance to shovel yet, etc. The dependence is there, but his choice to be as independent as possible comes straight from his heart.

Our life is not perfect, despite our choice to look on the bright side, to make our own lemonade when really a shot of bourbon would be preferred. One day I may be in a walker or wheelchair, and Geoff will indeed be better from these early years of practice. His choice to be as independent as possible was made on the very cold night he became paralyzed 25 years ago on January 29, 1995. He looked up at the star lit sky and an overwhelming sense of calm fell upon him, alike with shock likely, surrounded by friends who had been with him on that fateful snowmobile ride while one went for help. He recognized peace in that moment along with the intuitive assurance that his life would be better than good. People often ask how he knew, and he always says, “I made the choice to make my life good -- however that plays out. I make a choice each day about how to live the moments we are given.”