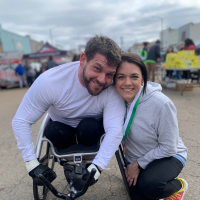 My husband and I have been together for a few years and recently got married. I have 2 daughters and he has 2 sons. Anyone who gets remarried in a normal relationship, when there are children involved, know that there's a learning curve in how to parent with step-children. To put it simply, people just have different ways of parenting. And, when you throw in two different parenting techniques, it can be difficult at times. But, throw in a spouse who has an SCI, and who has guilt issues from his injury and that can make for a storm sometimes.

I have always been the "bad guy" when it comes to parenting. I know when to have fun, but I also want my (our) kids to learn respect, have manners, learn to clean up after themselves etc. I admit there are times that I can be too uptight about things. But the basics still stand that I want our kids to do right. Who wouldn't want that?

On the other hand, my husband, who has guilt of almost never coming home one time, and not being able to give his kids the dad they could have had. He has a problem with discipline. He knows he needs to do better, but can't/won't do it. he has this thing, if something happens to him, he doesn't want the last memory his kids have of him to be a bad one. Like I said he knows it's not the way it works, but he said he just can't do (insert whatever discipline that you can think of). Yes, on his bad SCI days he will discipline the some, but then feels bad and pretty much buys them things or gives into them, to make up for it. Now, it's to the point where I feel like I am always harping on them because I am the only disciplinarian in the household. And the oldest son, when I tell him to do/or not to do something, he pulls the "I am going to tell/or ask dad. I do believe some of that is a behavior he has learned to get what he wants coming from a divorced home as well.

Please help, just don't know what to do. I am tired of feeling anxious every time we have all of our children together.