April 2020 in Relationships
First posted on the Reeve blog...

With our winter ski season cut short due more to COVID-19 than Mother Nature, our active family quickly turned to our little barn building (new to us as of September when we moved to our new house) to bust out the trampoline. Mind you, there was still snow on the ground. But if we were going to be sheltering in place for any length of time and working from home, there needed to be outdoor activities in place for the children.

We acquired the trampoline mid-September, so we only had a few weeks to bounce before we had to take it down again and store for the winter. Some people leave theirs up all year round but, given our snowy winters, we thought we would get more life out of it by storing carefully each winter. So, the day came and the kids were motivated, dragging all the boxes out from the back of the barn. Geoff had specific thoughts, as he always does about where the trampoline should go. We had already decided last year’s spot blocked him from being able to pass from the backyard to the front yard. Another issue was my riding mower couldn’t pass by either, but certainly Geoff’s accessibility was an important factor. 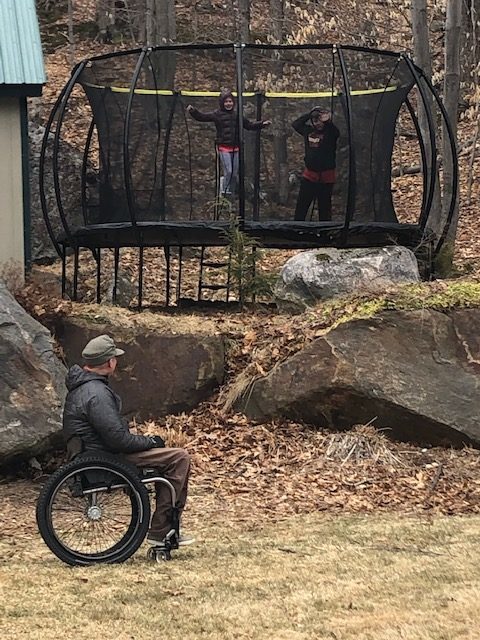 When the kids and Geoff conferenced about where the best place would be, I suggested the front lawn. The three of them, united generally against their mother’s opinion, scoffed at the idea. “No, Mom, you see, we were thinking, and Dad agrees that we should put the trampoline on that cool little spot of grass right behind the barn.” Geoff nodded solemnly in full agreement, despite that being even LESS accessible than the previous place. Further, the land was not exactly level. Good grief. Geoff reassured that we could and would figure it out.

Now last fall, good friends put the trampoline up one day with Geoff, while I was at school with the children. I came home from work and, voila, there it was, ready for action! Could not have been any easier-- at least from my perspective. Amazing. However, now with COVID-19, asking for help was out of the question. I also could not find the directions, which was a little perturbing, however, in our defense, the fall is a blur of moving, unpacking, soccer, school, and total life chaos. We could probably do without directions as Geoff was there after all, and he would remember. Plus, I married a problem solver. The frustrating part is that Geoff, with the best of intentions and a spinal cord injury, relies on others to be his legs and hands in most physical situations.

So, first we dragged Geoff up to the spot where we would re-construct the trampoline. Then, the 8,10, and 45-year-old, dragged all the pieces and parts, trying not to roll an ankle in the still frozen mud, snow, and ice remnants. Thus, began a three-hour process of assembly. At one point, Geoff suggested the children and I bring some wood pallets from behind the house over to build a zone for the purpose of leveling the ground without using soil from other places. He is a regular MacGyver. The only difference is that MacGyver carried all his own gear and ideas-- not his partner and young children. Turns out we didn’t actually need the two wood pallets, we dragged for what felt like a quarter mile. Geoff realized we could use the different sized legs to extend height where needed. This worked like a charm. We did, however, reach a certain point in the assembly, when the kids were getting tired and I was getting frustrated and Geoff could not exactly remember the order of what came next. Our directions arrived in the form of the friend who helped us to assemble last year. They saw us out putting it together and worried we might screw it up. Blessed by friendship again. We remained outdoors, appropriately six feet apart, and wearing gloves anyway given the cold temperature of the day. He made sure we had the extra set of hands, patience, and memory needed to finish the job we began hours earlier. It might not seem all that important in the middle of a global pandemic, but in those moments, for our family, this trampoline came straight from heaven.

Heather Ehrman Krill is a writer- wife- teacher-mom who lives in the White Mountains of NH with her husband, Geoff, a paraplegic and professional skier, and their two children, Carver and Greta who are 10 and 8. Please check out her novel True North, website www.heatherkrill.com, author FB page Heather Krill, and @heatherkrill1 on Twitter.