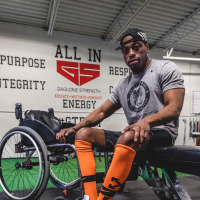 April 2019 edited April 2019 in Living with Paralysis
My name is Garrison Redd and when I was initially paralyzed at 17 years old I never knew that a couple of years later I would have a bachelors degree in Finance become a Team USA para-powerlifter competing to go to the tokyo 2020 paralympics/ olympics, also Model, do a Tedx Talk, and become a symbol for perseverance. So for anybody that is newley injured or knows someone that was recently injured tell them that the sky is the limit. Also when one door closes another door will open. check out my instagram to learn more @garrisonredd https://drive.google.com/file/d/1k2SKQdWnbNeK3pL4IKigobPlQU3MvZ3c/view?usp=sharing