What is at least one thing you have learned or grown from because of your SCI? — Reeve Connect
Home › Newly Paralyzed › Injury Level › Quadriplegic
Register now! Reeve Summit 2020: Where Care, Cure and Community Connect

What is at least one thing you have learned or grown from because of your SCI? 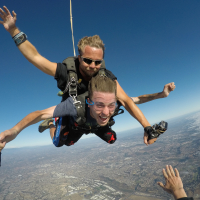 February 2019 in Quadriplegic
I know many people view this injury as a negative. Whether you have accepted your accident yet or not. This injury will change you as a person. It will teach you things you never would have learned if your injury never happened. What are some things that stand out to you personally?
For me one of the things that really stands out is the relationship that changed between me and my family. Before my accident I was the older brother who always caused trouble and picked on my younger siblings. My injury brought me closer to my family and I am so grateful for that. It strengthened my faith, which I never would have expected because I feel like for many people it would have pulled them father away. It changed my heart and turned me into more of a loving and compassionate person. Before my accident the only person I cared about was myself. It gave me a new direction and path. There is more I can say on this, but I would love to hear from others their opinions on this.
Accept what is, let go of what was, and have faith in what will be. -SONIA RICOTTI
3 · Share on Twitter
«12»